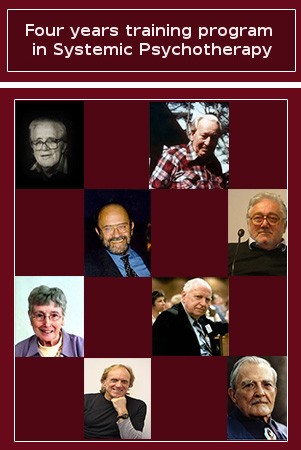 Psychologist, participant at a scientific meeting

I liked the combination of known voices with new voices that gave other dimensions.

Good for you! Great effort! Give a chance to other health professionals involved in your quest.

First time I went to a conference worthwhile. There were not only theories and research results.

For the last 15 years he is engaged in private clinical practice. For seven years he was responsible of studies at the four-year Training Program in Systemic Therapy of University of Crete. In 2009 he founded the Ergastirion of Systemic Thinking & Training, which runs until today.

As a psychologist, she has pursued private clinical practice, she has worked in Diagnostic, Evaluation and Student Support Centers (Ministry of Education) and since 2008 she is working at the Mental Health Center of St. Nicholas (Crete).

She was co-founder of the Ergastirion of Systemic Thinking & Training, where she participates as far as a scientific collaborator / trainer.

She has worked as a psychologist at the Center for the Prevention of Drug Use at Laconia and at various intervention programs for vulnerable social groups. For the last seven years she is engaged in private clinical practice at Heraklion.

She has been training staff at the Agency for Vocational Education and Training of IEK Heraklion.

She had been cooperating with the Ergastirion of Systemic Thinking and Training  from 2011 unti 2015.